The effectiveness of our fuel management was demonstrated during the Ovens Abbeyard - Yarrarabulla South bushfire in Hume region’s Ovens fire district.

In autumn 2019, Forest Fire Management Victoria (FFMVic) in collaboration with local landholders delivered an 883-ha planned burn at Devils Creek in the Buckland Valley. The community and FFMVic identified this as a strategic burn because of the difficulty containing bushfires on the Mount Buffalo plateau, where localised wind and weather patterns tend to push them toward private property in the Buckland Valley. This fire behaviour has been observed in the Ovens catchment in 1985, 2003, 2006 and 2013, and also reported anecdotally over the last century.

In early January 2020, the Ovens Abbeyard - Yarrarabulla South bushfire threatened Buckland Valley communities. The diagram below shows an area south of the area of the 2019 planned burn where the bushfire ran upslope toward the fuel-treated area. In anticipation of the uphill run, firefighters had undertaken large-scale backburning (shown in yellow hatching on the figure) to support suppression of the fire. At the height of the fire, it was spotting well into the fuel-reduced areas, but thanks to the fuel reduction efforts the fire’s behaviour decreased sufficiently for firefighters to effectively suppress it.

The 2019 planned burn also had other benefits. A new control line that was constructed for the planned burn gave firefighters access to areas previously inaccessible to vehicles and crews. Also, the detailed planning, collaboration and preparation between FFMVic and the local community for the planned burn strengthened relationships that were indispensable for rapidly and effectively suppressing the 2020 bushfire.

In summary, the Buckland Valley – Devils Creek fuel reduction burn saw effective collaboration with landholders, detailed planning and extensive preparation to create a fuel-reduced buffer in the Buckland Valley. The strengthened relationships between FFMVic and the local community also contributed to the rapid and effective suppression of bushfire throughout the 2019–20 summer. 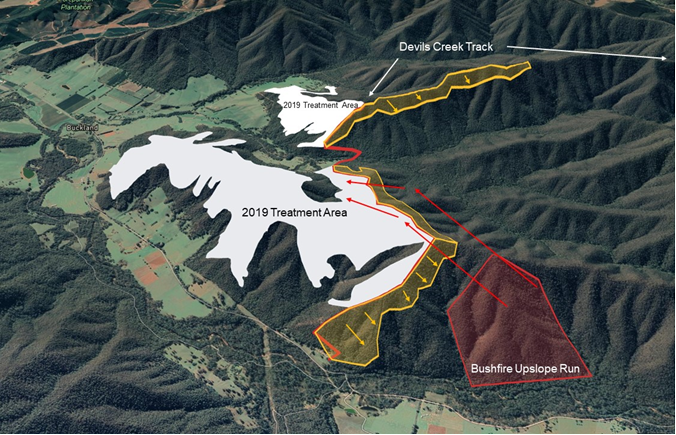